Posted on March 25, 2020 by politicswestchesterview

This is a good time to be getting outdoors, not only because of the mostly warming weather, but because it takes our minds off the cares of the world.

This is also a good time to study up on edible wild plants, which offer us free green vegetables without having to go far afield. Do shepherd’s purse, common orange day lilies, dandelion, broadleaf plantain, and ostrich ferns appeal to you? I can vouch for them all.

Wherever you gather plants, be sure herbicides and pesticides have not been used.

Before you try any, check the Edible Weeds site for details to be sure you have the right plant and whether to consume roots, stems, buds, or flowers. And don’t miss the recipes there for Spicy Pickled Day Lilies and Daisies or mushrooms stuffed with fern fiddleheads!

The first spontaneous edible plant (I’m trying to avoid “weed”) in spring here is shepherd’s purse, an annual that begins growing in February and starts flowering already in mid-March. It is so named because the petite and very productive seed pods were thought, in earlier times, to resemble the purses carried by shepherds in the field (or, in an alternate name, a lady’s purse). (Photo: shepherd’s purse before sending up its flower stalks).

You could take it for a nuisance, except that within a few weeks it disappears, leaving lots of seeds behind it for next year. It shows up as a small dense rosette, often only an inch or so in diameter. Then it sends up a stalk 2 to 4 inches, with tiny white flowers.

As with many wild edibles, the smaller the shepherd’s purse plant leaves are, the tenderer… but the more time it takes to harvest a serving of it. It is still good after the flowers come out, but if you wait too long, as the leaves grow bigger, they grow bitter.

Rinse a bunch of rosettes and attached flowers several times, then soak them a while, then snip off the very bottom of the stem where the roots attach. then treat them like lettuce in a sandwich, a salad with other greens. They are also good spread around on any cooked dish, wherever you might use parsley or similar. 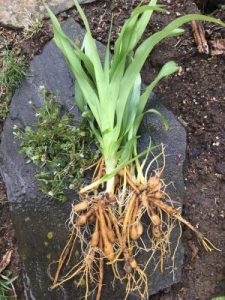 Day lilies are also good for eating right now. We are talking about the standard orange day lilies (do NOT eat other fancier lilies, like Easter Lilies!). If you have some that you don’t mind losing–and probably every gardener does, as they multiply and spread aggressively–just dig them up when the stalks are about 6 inches out of the ground. Now you see why day lilies are so successful in gardens or the wild: they store up food and drink for themselves, so they have the energy to endure in dry weather and come up fast in the spring. (Photo: 3 day lily plants after a first rinse outdoors, with a little bunch of shepherd’s purse to the left.)

Then snip off the tubers and the few rootlets attached to each one. Soak and wash them assiduously (rattle them around in several changes of warm water for a while), boil them a few minutes till they are soft (or cook them in a microwave with a little water in a covered bowl), and enjoy. They look and taste like extremely small potatoes.

Also, the core of the stalks is quite tasty; just cut off the tops and peel of any tougher green leaves till you get down to the white centers (think of leeks). Saute or boil them a little and combine with other vegetables.

Actually, you can eat the tubers at any time of year, and if you don’t mind sacrificing some flowers (they don’t last long anyhow, right?), the fried buds are quite tasty. Just put them in a little water and a bowl, and put them in the microwave for no more than a minute. Flowers are also edible.

Those two plants are edible right now; others will come soon. Sure, this is all sort of time-consuming; but it gets us outside and we don’t have to go to the store to get our green veggies and salad greens!

Photo below: shepherd’s purse with flowers

Nathaniel regards himself as a progressive Democrat who sees a serious need to involve more Americans in the political process if we are to rise to Ben Franklin's challenge "A republic, madam, if you can keep it," after a passerby asked him what form of government the founders had chosen. This blog gives my views and background information on the local, state, and national political scenes. My career in higher education was mainly in the areas of international studies, foreign languages, and student advising, most recently at Franklin & Marshall College in Lancaster, from which I retired in 2006. I have lived in West Chester since 1986.
View all posts by politicswestchesterview →
This entry was posted in Food. Bookmark the permalink.