Posted on March 6, 2015 by politicswestchesterview

“Everybody talks about the weather, but nobody does anything about it,” as Mark Twain or someone else famously said.

That is how racism is like global warming: We’re still talking about it, and nobody does anything about it. At least, whatever has been valiantly tried hasn’t really worked. The damage from racism continues; the carbon keeps spewing into the air. We can’t be expected to abandon our peculiar institutions, can we?

Didn’t we become post-racial in November, 2008? In our dreams!

Kali Holloway’s article “Hey, Smug White People: You (Yes, You) Are a Racist, Too” at Alternet, 3/2/15, sums it up in its title and goes on to catalog ten areas of racism in our society, with many links to supporting studies.

If you can bear more, see Ian Ayres, “When Whites Get a Free Pass: Research Shows White Privilege Is Real, New York Times, 2/24/15.

And David Dante Trout, “The racism that still plagues America,” Salon.com, 1/20/2014, where the city of which West Chester is the West receives some special mention:

… what Chester lacks in racial diversity and shopping it more than makes up for in public health pathologies. People here get really, really sick. The city has the highest mortality rate and highest lung cancer rate in the county. Its moms give birth to the highest percentage of low-weight babies in the state, and their infants die at twice the rate of other infants in Delaware County….

But maybe we didn’t realize how frustratingly slowly the human mind changes. And that sometimes it even goes in the wrong direction–as in our own country, at this particular point in history.

Here’s an eye-opener: attitudes toward global warming, like most things in our society, follow a racial pattern. See “Hispanics more likely than whites to say global warming is caused by humans” by Jens Manuel Krogstad, Pew Research Center, 2/27/15 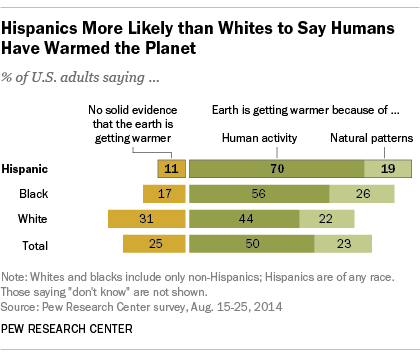 As you see (2014 data), almost 3 times as many whites as Hispanics deny that earth is getting warmer (blacks fall in between). Whatever we think of this winter (due, as I understand it, to a warming Artic disrupting the jet stream), 2014 was the latest in a series of super-warm years; and some people were paying more attention than others.

I wonder if those 31% are the same 31% who believe, in another Pew study, that “Humans and other living things have… existed in present form since beginning,”

Even more bizarrely, the percentage of Americans who believe the earth is warming has evolved rapidly from 77% to 57% to 72% within the past 8 years: 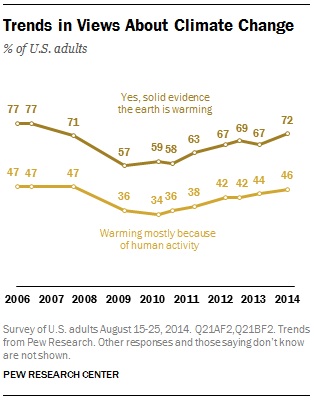 Chart from Cary Funk and Lee Rainie,
Public and Scientists’ Views on Science and Society, Chapter 3.

Clearly, since except for a handful with dubious outside funding sources, scientists have long agreed that the earth is warming, the public is being influenced by extraneous factors that have nothing to do with actual data.

First, attitudes toward them are strictly political. Another Pew chart shows that 83% of Business Conservatives believe that “U.S. has made the changes needed to give blacks equal rights” and only 6% of Solid Liberals agree. Are these two groups even living in the same country?

There’s a saying that “the new racism is to deny that racism exists.”

There was some progress, in the mid-1960’s, especially with the Voting Rights Act of 1965, which is being undone before our eyes by 5/9 of the U.S. Supreme Court, just as the civil rights amendments after the Civil War were undone by the Hayes-Tilden “compromise” of 1877, the end of Reconstruction, and the beginning of the Jim Crow era.

So, for the first round of progress it took a bloody war between the states, and for the second, years of white-on-black terror culminating in Bloody Sunday on the Pettus Bridge in Selma, March 7, 1965, as we have all had a chance to see in the movie Selma.

As with racism the evidence mounts up, the damage continues for global warming. What cataclysm will it take for people and governments to start paying attention? When Miami and New Orleans sink below the waves, perhaps?

Nathaniel regards himself as a progressive Democrat who sees a serious need to involve more Americans in the political process if we are to rise to Ben Franklin's challenge "A republic, madam, if you can keep it," after a passerby asked him what form of government the founders had chosen. This blog gives my views and background information on the local, state, and national political scenes. My career in higher education was mainly in the areas of international studies, foreign languages, and student advising, most recently at Franklin & Marshall College in Lancaster, from which I retired in 2006. I have lived in West Chester since 1986.
View all posts by politicswestchesterview →
This entry was posted in Civil rights, Environment and tagged global warming, racism. Bookmark the permalink.

1 Response to Racism and global warming