Women candidates and the two parties

Posted on October 25, 2014 by politicswestchesterview

On 9/8/14 the Daily Local News published a letter from me under the title “More women would be good for state and country.”

Though I don’t doubt that that title is literally true, what I really said is that “a record number of women and supporters of women’s rights elected to office in Harrisburg and Washington this year would be good for Pennsylvania and the country.”

As it happens, it would be good for Democrats too, as they have more women running. I’m going to say more here.

On August 26, Women’s Equality Day, people across the country celebrated the 94th anniversary of the ratification of the 19th Amendment, which gave American women the right to vote.

On August 26, 1920, the 19th Amendment was certified, securing for women the fundamental right to vote. The product of decades spent organizing, protesting, and agitating, it was a turning point on the long march toward equality for all, and it inspired generations of courageous women who took up this unfinished struggle in their own time. On the anniversary of this civil rights milestone, we honor the character and perseverance of America’s women and all those who work to make the same rights and opportunities possible for our daughters and sons….

As the president goes on to say, women deserve equal rights, treatment, pay, and opportunities. Shouldn’t that be obvious to every one of us?

So how are we Pennsylvanians doing in equality of women among our elected legislators? Not so well, unfortunately.

According to the National Conference of State Legislatures (as of November 8, 2013, but figures should be about the same today), Colorado ranks first at 41% women and Pennsylvania ranks 35th. Put differently, only 15 states (most of them in the South) have less representation of women in the state legislature.

According to the Center for American Women and Politics, women comprise 18.5% of the US House and 20% of the US Senate. PA has just one woman representative (Allyson Schwartz) out of 18 House members, or 6%, and no female senators.

So what can be done about Pennsylvania?

On August 26, eight Democratic women candidates for PA Senate and House from Chester County joined in the rally in Harrisburg, celebrating the record number of women running this year for the state Legislature. To be precise, in Chesco, 7 women are running out of 10 Dem candidates and 1 woman out of 11 R candidates.

As local Democratic candidate Susan Rzucidlo (158th House district) pointed out, “In order to have a truly representative government our Legislature should reflect the diversity of our state.”

Tom Houghton, Dem candidate for U.S. Congress PA-16, said that “It is unfortunate that in 2014, ‘women’s issues’ such as access to health care, equal pay and equal opportunities are still matters of political and policy debate.”

And where do elected Republicans stand? Among many other possible examples:

In April of this year, Sen. Pat Toomey (PA) voted to filibuster the Paycheck Fairness Act, which still hasn’t passed the Senate, though the House passed it in 2009. In fact, not a single R senator voted for it. According to “Senate Republicans Block Bill on Equal Pay,” New York Times, 4/9/14:

Supporters of the bill, called the Paycheck Fairness Act, say it would bring transparency to worker pay by making it illegal for employers to penalize employees who discuss their salaries and by requiring the Equal Employment Opportunity Commission to collect pay information from employers. 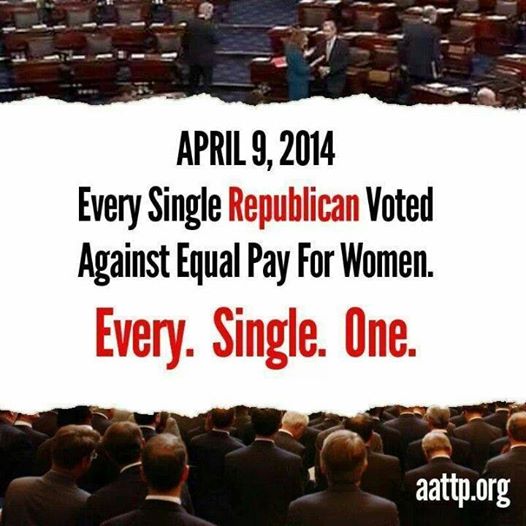 The D’s routinely accuse the R’s of waging a “war on women.” Maybe “war” is a bit strong? Putting it more genteelly: Too many elected R’s just don’t seem to care about what American women care about.

But I want to emphasize, these are not issues “for women.” Fairness in representation, fairness in pay and job access, fairness in legal protections are good for all Americans. And electing a record number of women and supporters of women’s rights to office in Harrisburg and Washington this year would be good for Pennsylvania and the country.

Wouldn’t it be great if this year’s PA Dem women candidates (pictured below with Katie McGinty, head of Tom Wolf’s Fresh Start Campaign, all got the chance to start changing the outmoded political culture in Harrisburg, as of January 2015? 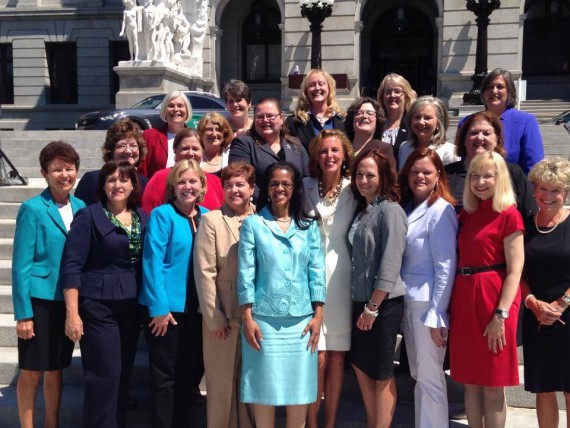 So Chester County could help Pennsylvania along. How does the County, long under R domination, currently rate in terms of representation of women?

Though these are very different categories, adding the figures does give us an idea of the underrepresentation of women: 9/39, or 23%. Isn’t this strange, when women comprise slightly over half of all who vote?

PS Summary of the % of women:

Nathaniel regards himself as a progressive Democrat who sees a serious need to involve more Americans in the political process if we are to rise to Ben Franklin's challenge "A republic, madam, if you can keep it," after a passerby asked him what form of government the founders had chosen. This blog gives my views and background information on the local, state, and national political scenes. My career in higher education was mainly in the areas of international studies, foreign languages, and student advising, most recently at Franklin & Marshall College in Lancaster, from which I retired in 2006. I have lived in West Chester since 1986.
View all posts by politicswestchesterview →
This entry was posted in PA politics, Women and tagged 19th amendment, Chester County, PA House, PA Senate, US Congress, women candidates, women's suffrage. Bookmark the permalink.

1 Response to Women candidates and the two parties